How does the Coleman camping coffeemaker work?

It’s non-electrical, so there’s no plug anywhere. Instead, it’s built for propane camping stoves or trailer stoves. You have to put it on the stove, turn the knob, and wait for the brewer to do its thing.

But is this a good idea of making your coffee on your camping trips? Let’s hear what previous buyers have to say. Here’s our Coleman camping coffeemaker review so that you can find out more about the product, specifically consumer feedback.

A Quick Rundown of Its Features 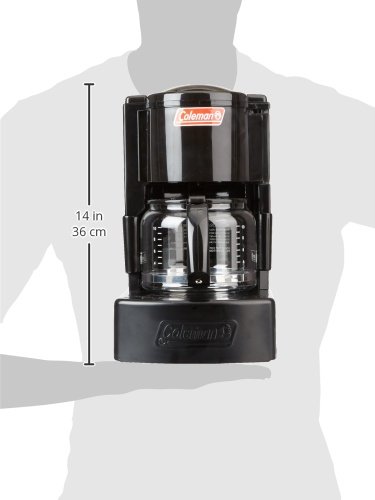 Here’s what to expect.

The Coleman camping coffeemaker has a steel base that should fit most camp stove burners such as the Coleman Classic. Nope, this coffeemaker doesn’t come with either a propane cylinder or the stove. Separate purchases must be made for these items.

To make coffee, put this coffeemaker over a stove, and then light up the stove after filling up both the reservoir and the grounds compartment. As advertised, the boiling water moves through the filter and then the brew moves down into the glass decanter.

Note that the water reservoir has a 10-cup capacity.

This camping coffeemaker is also equipped with a Pause ‘N Serve feature, which stops the brewing process for some time while you pour yourself a cup.

How heavy is this coffeemaker?

Difference Between Using The Coleman Coffeemaker vs a Percolator

Overall, the Coleman camping coffeemaker is the better choice because of the following reasons.

One, you’ll get fewer or no coffee grounds with the Coleman. Two, it’s easier to set up and clean. Three, unless you have the larger percolators, the Coleman makes more coffee cups, so it’s ideal when camping with a large group. Also, some people say that the Coleman makes better-tasting coffee.

Is this a reliable camping coffeemaker?

Yes, it is. It works great on a gas or propane stove, but it’s not as fast as an electric coffeemaker. Plus, as one person has observed, it may not be the most compact for a camping coffeemaker.

As previously mentioned, the taste of the resulting brew is better than that of a percolator. And compared with a French Press, this coffeemaker will spare you from having to deal with wet cleanups.

Duration of the Brewing Process

How long does it take to brew 10 cups of coffee?

There are different responses to this question, mainly because it really depends on the flame output. For instance, in this video, the uploader/reviewer managed to time the whole process, and it took him 14 minutes and 36 seconds to complete the brewing cycle.

Some people, on the other hand, say it can take 5 to 10 minutes.

Can you leave the burner on to keep the coffee warm?

This is actually a good question considering that when camping, the temperature can go down fast. It’s best, however, that you transfer the coffee into a thermos to retain its temperature.

Limitations of the Coleman Camping Coffeemaker

Can this coffeemaker be also used on a grill?

Although some people say it’s possible, it’s not a good idea especially if you’re using a stove with no centralized heating or flame source. This could damage the coffeemaker, especially the plastic parts (e.g., handle of the carafe and the lid).

Caution: Turn off the gas as soon as you’re done!

At least two people have observed that the bottom of the tank cannot really withstand heat for a long time. That said, as soon as the coffee brewing cycle is done, turn off the gas. Otherwise, the bottom might melt.

Should you get the Coleman coffeemaker for camping? Let’s end this review with this recommendation.

Yes, get the Coleman camping coffeemaker. It’s reliabe, quick to clean and set up, and compared to a percolator, this coffeemaker does not have grounds in your coffee cup.