Let’s start this Delonghi EMK6 review by talking briefly about the Moka process. What is it, and why should you try it?

The Moka process is a brewing procedure made possible through the use of a Moka pot, an eight-sided, easy-to-use brewing device. What’s so special about this pot is that it brews coffee by relying on boiling water’s pressurized steam to push a stream of coffee through an upper chamber.

According to sources, the Moka pot has its origins in Italy. While most of these pots are classified as “stove-tops,” you can find some brands that offer electric variations.

The De’Longhi EMK6 Alicia Moka Pot is an electric device that’s advertised as an “espresso coffee maker.” It’s important to note that to come up with true espresso, a coffee machine should be able to extract coffee at a pressure of at least 9 bars. Moka pots can only achieve a pressure that falls within the 1-2 bar range, so don’t be surprised if the resulting Moka drink doesn’t compare with the espresso offered by coffee houses.

Also read: Breville ESP8XL vs Delonghi EC680, Which one to Get?

Now that the Moka brewing process is out of the way, let’s focus on the EMK6. What can it offer? Here’s a rundown of what you can expect. 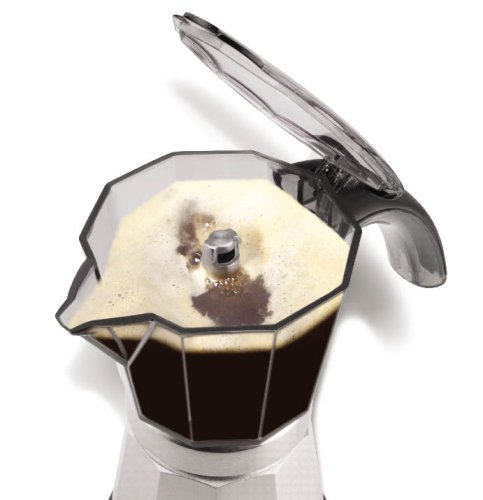 The Moka pot has two main parts – the upper and bottom chambers. Between these chambers is a funnel-shaped filter that holds the coffee grounds. This filter has a narrow passageway in which boiling water goes through from the bottom chamber to the upper chamber.

To use the Moka pot, first, fill the bottom with water and then fill the filter with your ground coffee. As the DeLonghi EMK6 is an electric Moka pot, the next thing to do is to plug it in and then turn it on by simply pushing the ON button.

When the water boils, expect the pressure created to push the grounds up to the upper chamber. Turn the unit off, and the pour yourself a well-deserved coffee drink.

Up to 6-Cup Capacity

This Moka pot weighs only 3 pounds, so if you’re looking for a lightweight brewing device, you can be sure that the EMK6 fits this requirement very well. Aside from that, note that it measures about 11 inches in height, so it’s also a space-saver, which makes it the ideal coffee buddy if you don’t have the largest kitchen countertop.

When it comes to capacity, this Moka pot is advertised as having a 3-to-6 cup espresso capacity. This coffee brewer has a filter adapter that lets you choose between 3 or 6 cups. If you live with someone, there’s more than enough espresso for you everyday.

Auto Shut-Off and Other Safety Features

You don’t have to worry about overflows or getting your coffee burned because the makers of the EMK6 have introduced an auto shut-off feature for safety.

Speaking of safety, this Moka pot is equipped with a two-level safety system. In addition to when the machine automatically stops brewing when it’s done, it also activates the auto shut-off feature when you lift the body from the base.

In some parts of the world, coffee can easily become cold due to the climate or weather. With the EMK6, expect a keep-warm function, which should maintain the hot temperature of the concoction for 30 minutes.

At a glance, here’s a list of the key features and specifications of the Delonghi EMK6.

Delonghi EMK6 Review VIDEO: How to Use the EMK6 Moka Pot

Watch this video for a brief demo.

In this section of the Delonghi EMK6 review, we’re giving you a summary of what previous consumers have to say about their EMK6 Moka pot. This should help you decide whether or not this espresso maker is for you.

Pros of the Delonghi EMK6 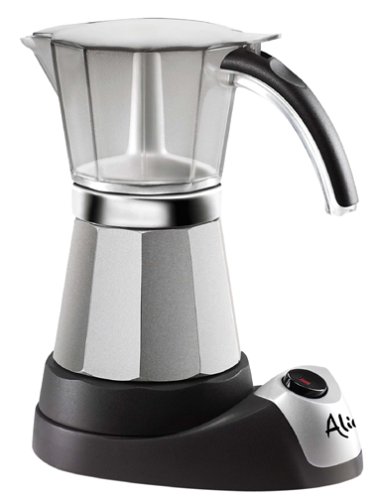 Love traveling but hate the inconsistent taste of coffee when you’re outside your house? The Delonghi EMK6 may be the right coffee machine for you.

Can you take it anywhere?

Although one person said there may be a learning curve before you achieve your desired coffee, there’s no doubt that the lightweight nature of the EMK6 is enough to say it can be easily transported from your home to any part of the world.

If you don’t like the coffee served at the office, you can always rely on the EMK6 to concoct the perfect drink anytime you want. If you’re traveling overseas, you can always pack this espresso maker without difficulty.

How long does it take to brew coffee?

It’s actually quick. One person observes that you can brew coffee within 3 to 5 minutes only.

How does this compare with its stovetop counterpart?

What is the advantage of this electric Moka pot over a stovetop? Electric devices are much safer, and since the Delonghi EMK6 has safety features, you don’t even have to watch it brew your coffee unlike with a stovetop.

Limitations of the Product

Delonghi’s choice of a transparent plastic upper chamber is paved with good intentions. The transparent feature has its purpose, especially if you’re the type who appreciates his coffee more if he’s able to see it brewing.

However, some people don’t like the idea of using anything plastic in their brewing process. One person even said that he was able to taste a difference. Another said there’s a plastic smell especially during first use, especially if you didn’t run it with plain water before use. Plus, plastics don’t last that long compared to their metal counterpart.

When it comes to capacity, this Moka pot is advertised as a 3-6 cup espresso maker. But as several people have said, you’d probably wish it were bigger because it feels it can only be enough for one person.

Delonghi EMK6 Review: Who Is This For?

To end this Delonghi EMK6 review, let’s answer the ultimate question: Should you get the Delonghi EMK6? Here’s what we have to say.

It doesn’t produce “true” espresso, but it’s an inexpensive device to create your own coffee anywhere you are – whether you’re camping in the woods, traveling overseas, or just chilling at home. Compared to a stovetop, this electric Moka pot has safety features that allow you a set-and-come-back brewing process. No worrying about overflowing or burning your coffee.

If you’re looking for a cheaper brand, here are some names to try.